The gospel for the fourth Sunday of Lent is the story of the prodigal son from chapter 15 of Luke.  I thought that I would share the three small reflections on this passage that were a part of my radio program on WAOB [106.7fm] from last evening.  The program "Drawing Life Giving Waters From Jacob's Well" allows me to give three reflections on four scripture passages for the next day's liturgical readings.  The program is an hour long live broadcast.   Here is what I had to share.

"We conclude our reflections with a story from the 15th chapter of Luke's gospel.  It is the long but beautiful story of the prodigal son ... or the loving father ... or the jealous brother.
First we have the ungrateful son who demands of his father his share of the inheritance, depriving his father security in old age as well as respect and dignity ... and he wastes his inheritance foolishly.  He did not come to an awareness of his sin until he felt the effects of his foolish ways.  He had nothing and was treated by the world around him with no dignity or respect.
To his credit, though, he came to his senses and realized that even as a servant he would be better off in his father's household.  He bites the bullet ... swallows his pride ... and returns home in a true spirit of repentance.  As he says: "I have sinned against heaven and against you.  I no longer deserve to be called your son."
When we have sinned against heaven and against our family, are we willing to return home in a true spirit of repentance?"

"Now we have the loving father's story.  We hear that he was faced with the pain of an ungrateful son's greed.  That pain tore at his heart.  What had he done wrong?  And if nothing, then why was he treated in this way?
Like God could have done with us, he could have written his younger son off ... he could have declared him dead to the family.  After all, he had another son and other obligations.
But he did not!  We hear that "while he (the younger son) was still a long way off, his father caught sight of him and was fillied with compassion."
He did not just happen to look up and see him coming.  The story suggests that his heart was vigilant in watch and hoping for his son's return.  And his heart was filled with compassion ... not anger or bitterness.
This is the heart that the Lord has for us when we come to our senses and return home.  We are welcomed back with joy.  Accept his welcome."

"And finally, we meet the older son whose faithfulness took on a bitterness when confronted with the generous love and acceptance of his father for his no good brother.
When his dad asks why he was bitter, he spills his guts: "all these years I have served you and not once disobeyed your orders" yet you never threw a party for me.
Do you ever find yourself resentful of the generous love or kindness or mercy that the Lord, or for that matter anyone else that you know, shows to someone that you don't feel deserves it?
Yet this is what our heavenly Father is like.  He rejoices in the one repentant sinner who is saved ... in the lost coin that was found ... in the son or daughter who comes home.  He welcomes them as his child ... cloths them with the best ... and celebrates that which was lost as having been found.
Thank him for such tremendous love."
Posted by Father Len at 7:27 PM No comments: Links to this post

This week I prepared a reflection for our Diocesan Web Site [www.dioceseofgreensburg.org] and I thought I would share it with you.

"In the area of education, we hear of the 3 R's: reading, writing and arithmatic.
In the season of Lent there are at least four R's that describe the journey to Easter and beond: Repentance ... Redemption ... Reconciliation ... Restoration.
From the clarion call of Joel on Ash Wednesday we are called to repent of our sinfulness.   Today's [Sunday's] gospel echoes that call: "If you do not repent, you will all perish."  No matter who we are, the need to repent, for falling short of the the call to holiness that the Lord invites us to embrace is vital.  We know that, and this R is the easiest.  Repentance is the hallmark of the Lenten journey.
Redemption we find is easier to understand than to accept.  Redemption means that the price has been paid ... that we have been judged with mercy and set free ... that what is offered is given in exchange for what is owed.   Some of you may remember "redemption centers", where the saving stamps that we accumulated were exchanged for an item that we desire.  Our redemption is found in Jesus Christ.  His suffering and death on the Cross paid the price for our sin.  Any debt that we owed to the evil one has been satisfied by this unselfish act of love.  We are set free.  While we understand this, we find it hard to accept that we are truly free.  How can anyone pay the price for our sin, a sin that leads to death.   Our struggle is to see that when our sins are forgiven, that they are no more ... and we are free to start anew.
Reconciliation is the more difficult of the R's.  It means that I must make up with those who I have offended or with those who have offended me.   It is not enough to forgive ... I need to put my hurt behind me and move forward in a true spirit of love and renewal.   Only then am I truly free.   This is easier said than done.
And only then the fourth R can begin to be accomplished.  Only then can I be restored to the dignity of a child of God.   Only then can the holiness that we are invited to share with God begin to be manifest in my life.   Only then will the grace of God transform me into an instrument of his peace and a source of his love.
The importance of the four R's in our life's journey rests not in our sins and sinfulness and the need to repent, but in God's free, overflowing mercy.   God saved the children of Abraham from Egypt because they were the people whom he loved, and he cared for them.   He frees us from the slavery of sin and death because we are his children, and he loves us.   Sent by the Father to redeem us, Jesus IS the mercy of God.   That mercy, asked for in our repentance, experienced in his redeeming grace, humbly embraced in the act of reconciling, and rejoiced in as we are restored as his beloved, is at the heart of his love.   That love is his pledge to us.   That love is our life.
Fear not ... journey through Lent, through the Triduum, through Easter, through life accepting his love and praising him for his mercy."
Posted by Father Len at 4:13 PM No comments: Links to this post

We have prepared ourselves - schedules made, Mardi Gras celebrated.
We have been signed - marked by his Sign with ashes, to remind ourselves of the nothingness of our lives without him.          We have been invited by the prophet Joel "to
return to the Lord with our whole heart, with fasting, and weeping, and mourning.  To rend our hearts, not our garments, and return to the Lord, our God."
We have been reminded by Joel that our God is gracious and merciful, slow to anger, and rich in kindness, and relenting in punishment.
Reassured by these prophetic words we venture forth into a journey of faith that leads us from sin and death to redemption and new life.  That journey takes us through the difficult task of facing our frailty and sinful condition ... to a sorrow for our sins … to a repentance of our actions against the Lord and his anointed ... to a humble placing of ourselves at the mercy of God and his forgiveness through the Church ... and to a redemption - a restoring of the dignity lost by sin but won again for us by the passion and the Cross of Jesus Christ.  Then, and only then, can we pass through the Three Sacred Days and celebrate the new life of Easter.

Pope Benedict XVI has said: "Each year, Lent … stimulates us to rediscover the mercy of God so that we, in turn, become more merciful toward our brothers and sisters."

I have a sense that this Lent will be like no other in recent years.  Since last Easter the Church has been confronted by the sinful actions of a number of her priests and the failure of the Church in providing protection and a timely response to this scandal and the crisis regarding the abuse of the young within the Church.  Like Joel reminds us though, we must return to the Lord with our whole heart, with fasting and weeping and mourning.  We must do that as individuals and as Church.
We must repent of the sins of abuse, with a special expression of sorrow to the victims of this abuse who have suffered over the years.  We must seek justice for all of those involved, for those victimized by this terrible abuse of trust and power and those accused and given no way of defending themselves.
And then comes the hard part - we must humbly place ourselves, the victims, the accused and the Church herself at the mercy of God.  Only then can healing begin to take place … only then can hurts be healed and justice brought forth … only then can we be made new as a Church redeemed by Christ and renewed in his loving embrace.
This is the challenge of this Lent.  And I would venture to say that it will take more than forty days for peace to enter our hearts and minds.   But it is the necessary first steps in a transforming journey rooted in hope and love that will lead to new life.
Posted by Father Len at 9:36 PM No comments: Links to this post 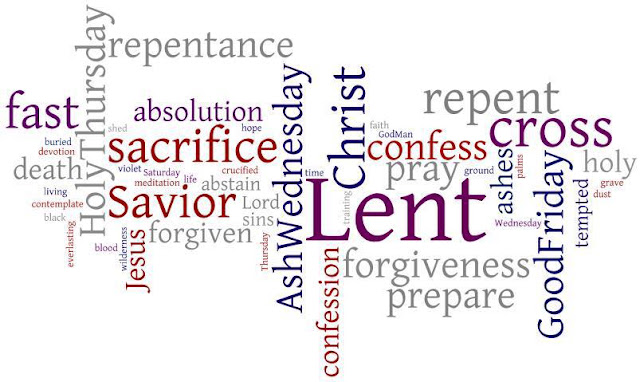 "O God, who are moved by acts of humility
and respond with forgiveness to works of penance,
lend your merciful ear to our prayers
and in your kindness
pour out the grace of your blessing
on your servants
as they follow the Lenten observances.
May they be worthy to come
with minds made pure
to celebrate the Paschal Mystery
of your Son."

As we move into our journey through Lent, I pray that the Lord's grace fill your hearts and minds.  May the discipline of this journey bring us to a deeper, more personal and life-giving relationship with the author of life and the dispenser of mercy - Jesus Christ.

A note about the above image: I saw this image on facebook and not seeing a copyright notice, reproduced the image.  I have one like it that was given to me on my departure from my last assignment from the school children at Queen of Angels school, describing what they saw as my qualities.  That image is seen below … and brings back many great memories. 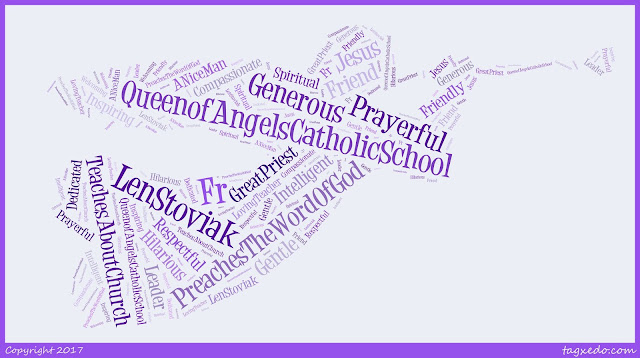 Posted by Father Len at 4:27 PM No comments: Links to this post

Father Len
I was ordained a Catholic priest for the Roman Catholic Diocese of Greensburg in 1973 and I am a retired priest of the Greensburg Diocese. The purpose of this blog is to simply "share my thoughts along the journey". These reflections may be scriptural, spiritual theological or social, touching upon parish life and the greater reality that those experiences reflect.